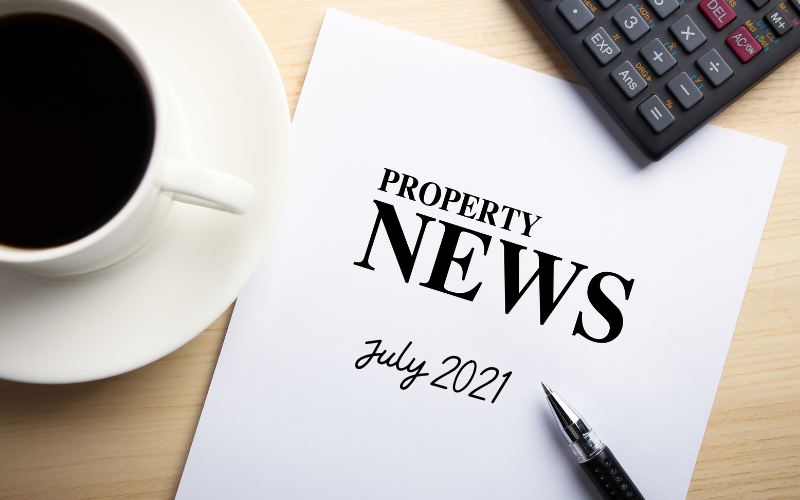 Read on to find out more, with some of July’s key headlines across the UK property market:

The average asking price of a UK home has reached a new high according to the property website Rightmove.

Figures that are due to be released shortly will show a new peak, surpassing the previous record that was set back in May.

Rightmove also confirmed that the first six months of 2021 have been their busiest since 2000 as buyers rushed to complete their purchases before the phasing out of the stamp duty holiday.

The pricing boom has partly been caused by a shortfall in properties on the market. Rightmove confirmed that 140,000 more sales were agreed in the first half of the year than the long term average, however, there were 85,000 fewer new listings, leading to a shortfall of 225,000 properties, which has put sellers in the driving seat when it comes to negotiating as demand for properties continues to outweigh supply.

The government’s stamp duty holiday is now winding down.

The scheme, which was introduced to stimulate the housing market during the Coronavirus pandemic has been an overwhelming success, with savings of up to £15,000 for some buyers.

That saving has now ended, however, buyers can still save up to £2,500 on stamp duty if they complete before the 30th September.

And the housing market is expected to remain strong, despite the ending of the stamp duty holiday.

Property website Rightmove has announced the towns and cities with the highest rent increases in the past year with coastal and commuter towns seeing the biggest jump.

Rochdale, Farnham and Folkestone have all seen average rents increase by more than 25% as tenants look for more space away from the major cities.

However, the recent easing of Covid restrictions has also seen some of the UK’s major cities begin to make a comeback, with renters looking to move back to city life.

Prices have risen 6.8% in Nottingham, and 3.8% in Liverpool compared to a year ago, however, in London and Edinburgh, rents are still lower than 12 months ago, at 6.8% and 4% respectively.

Self-employed people who have received government grants during the pandemic are being refused mortgages by many high street banks.

NatWest and the Royal Bank of Scotland have confirmed they’re not accepting applications from anyone who applied for a self-employment income support grant after 14th July 2020, while employed people who have been on furlough are also not having their applications accepted by many major lenders.

Self-employed workers are also being asked to come up with a higher deposit by some of the major high street banks. Metro Bank has confirmed that a deposit of at least 20% is required, while Santander wants a minimum of 25% before lending to self-employed workers.

It’s not all doom and gloom though as interest rates remain low!

The North West Continues To Lead The Housing Boom

Prices in the North West of England have risen by more than 15% over the past year, making it the area that’s seen the biggest increase across the UK.

Wales and Scotland aren’t far behind, having seen 10%+ increases too, but London has seen the smallest rise in prices, at an average of 5.2%, as buyers have increasingly looked to move away from the city to find more affordable properties with additional space.

Homebuyers in some areas are still facing lengthy delays for council land searches. Increased demand has left some buyers facing an average wait time of 55 days for searches to be completed when the target is 10 days. Conveyancers and local councils are playing catch-up after the stamp duty holiday rush.

If you are considering buying or selling, Unico Property Group are your local property experts for the East London area. Call us on 02089809520 or email [email protected] to chat with a member of our friendly and experienced team.